The next few days we keep an eye on the sky. To understand the cloud formation, to recognize the storms early enough. We observe the river, the different currents, the branches and plants floating in the water. Watch the dolphins jumping out of the water, and small fish dashing across the water fleeing predatory fish. Houses appear on the shore, small settlements, then again only the green dense forest.

We start usually at sunrise and have breakfast on the boat as soon as we are in the current. Occasionally we row to get a faster current or to cross the river, but often we just let ourselves drift. We have a river map with all the villages listed. Tinka had photographed and printed them out in the Capitaneria in Pucallpa.
In the afternoon we look for a village. We never know what to expect, how big the village is, whether it is an indigenous community, whether we can stay.

We arouse a lot of curiosity in the villages and encounter different levels of shyness. The children always come first and marvel at the newcomers in their strange boat from a safe distance. But adults are also mostly there and watch our rowed mooring maneuvers, which certainly often look a bit awkward.

While two of us make our way to the alcalde, the village head, the others stay with the boats, often under the watchful eye of the children present. To break the ice, Robin takes out his guitar and starts playing. Aurelio has picked up his juggling balls and throws them into the air. The children come a little closer. They are rarely really scared. At least they should know white people from television. And after all, this is the Amazon, the highway under the rivers.

Most of the time we get permission and a dry place to sleep. Often there is still time to make some music or to make friends with the villagers. After some initial shyness they are very helpful, give us food without asking and offer their houses for cooking.

Some villages are made up of just five families, others have a few hundred residents or even a thousand. The houses are made of wood, mostly built on stilts, because the level of the river varies greatly throughout the year. The corrugated iron roofs have replaced the palm leaves almost everywhere and are well suited to collect rainwater. If it stays dry for a long time or people don’t have a water tank, they resort to the river. Electricity in the smaller villages is only available with diesel generators, which are usually turned on for a few hours in the evening. To have light and for satellite television.

The school is often the only brick building, financed by a government program, just like the football field, which no village should be without. On the other hand, the teachers are missing sometimes and the children either have to get to the next larger village or simply don’t go to school.
Our offer to do something in schools is always well received. It is a good change for the children and also for the teachers.

The plastic monster comes to visit

We visit the school in an Indian village on a small tributary of the Amazon and offer our services to the director. A few English lessons are quickly arranged, plus a slackline workshop and music program. And the first theatrical performance of the plastic monster. In front of around a hundred schoolchildren, Aurelio plays the plastic monster, which feeds on garbage and poisons air, water and earth. I have taken on the role of the reader and I tell the story of the greedy mankind who exploits the raw materials and poisoned the planet with petroleum. Yaku, Sacha and Wayra, the protective spirits of the river, forest and wind, are played by Tinka and can finally free the plastic monster from trash and show him how to sort and recycle the trash.

A simple message but a necessary one. Because no one here lives outside the monetary system and with money come all the products, wrapped in plastic. In the village shop, everything is put in a plastic bag again. Packaging plastic is then dropped where it is no longer needed. Biscuit packs line the sidewalks, empty bottles and plastic bags, washing powder bags are disposed of directly at the river. There are exactly three options for waste disposal: burning, burying, or throwing into the river. What would be the least harmful? Avoiding garbage from the start.

And it comes from the outside world. With the lanchas, the cargo ships that deliver the products and supply the entire Amazon. These are then distributed from the cities to the villages. There is always at least one shop where you can buy basic food such as rice and pasta. You can always find sugar, flour and cookies. Soft drinks and water in plastic bottles. Shampoo and detergent too. Gasoline is also bought for the boat engine and the power generator for satellite television and smartphones.

Nevertheless, the people here are comparatively low consumers. Most of the food consumed is grown on cleared forest clearings. Yuca, corn, bananas. In addition, fish from the river and everything that moves in the forest can be shot with a rifle.

After the play, the garbage collection starts. Captain Robin carries a plastic sack and is surrounded by children who are moving through the village and collect plastic waste. Then comes the second part. Tinka stands on the soccer field, which is also the village square, and demonstrates the construction of an ecoladrillo, an eco-brick. The rubbish is stuffed into plastic bottles and pressed together with the help of a stick. This creates stable waste packages that can be used as building materials like bricks. Or to frame a garden or young plants.

It is only a temporary solution. If the garbage is already there, at least keep it together and use it for something. Better than burning it or throwing it into the river, but what is the likelihood that the villages will continue the practice once demonstrated? And then use the ecoladrillos too? And don’t you just keep the memory of the crazy shoe-free gringos with their idea of ​​the plastic bottle house?

Subdued voices and firelight penetrate out of the Maloka into the dark night.A Maloka is the traditional house of the Indians. In the past, all families of a tribe lived together in the Maloka. Each family had their private area on the outer edge, while the large square in the middle was shared. Here the men of the village are gathered para mambear, to take Mambe and talk. Mambe, the green powder of roasted and dust-crushed coca leaves mixed with the ashes of another plant, has traditionally been produced and consumed for a long time. To strengthen the stimulating effect, the men smear ambil, a tobacco paste, in the cheek before a spoonful of mambe follows. Then they talk and often indistinct mumble, because of the stuffed cheek. Huitoto is spoken here, the tribal language of the only less than 10000 Huitotos spread throughout the Amzanos area. It’s about the festival in the other Maloka. Because in this village also live the Boras, another tribe. The village is divided, each tribe remains more among themselves. Even if there are no conflicts, the festival should improve relations and take place in the Maloka of the Boras. There, the Bora women prepare masato, a jelly-like potion of yucca, as well as yucca flour cakes for the next days. These are to be exchanged during the festival against the gifts of the Huitotos. In their Maloka, the men prepare mambe and practice their almost forgotten songs and dances.

Children paint their faces with Huito, a plant color that is still transparent when applied and only a few hours after skin contact it turns into dark purple to black. We are also painted on the day of the festival before we acompany the Huitotos through the village to the Maloka of the Boras. The men have wooden sticks with their gifts. Fish, a little monkey, a dead sloth, parrots, a jungle rat. On a stick hung big fat maggots, which are desperately trying to escape their fate to get eaten. The young men hand around a bottle of masato and make a few screams before entering the space of the celebration.

There are about 200 people gathered. The Huitotos put their gifts on banana leaves before greetings are exchanged and long speeches are held. Then it’s finally time for the dances. The Huitoto men stand side by side in a row and make small steps forward, knocking the rythm with their sticks on the floor while singing. The women follow the men. There are different songs and dance formations. After a while, the Boras are dancing while the others take the opportunity to take Mambe or to take a sip from the liquor bottle. Then the Boras distribute their yucca breads for the guests. We also get one, because Capt. Robin brought a large stick Mapachu, tobacco, as a gift.

The dancing continues until late into the night. The two groups dance alternately. But at one point the Huitotos don´t stop and keep on dancing. At some point the Boras have enoughs, whereupon they take the sticks away from the dancing Huitotos, and finally they rest.

It is time for us to continue after one week. About half of the long way to Leticia is still in front of us and part of it is declared a pirate zone. Even the Lanchas, the larger passenger and cargo ships, have weapons with them for safety and also fire warning shots. But could we really become the target of pirates? Or are people just too scared? We will find out.

Support me and get the new Calendar 2020! 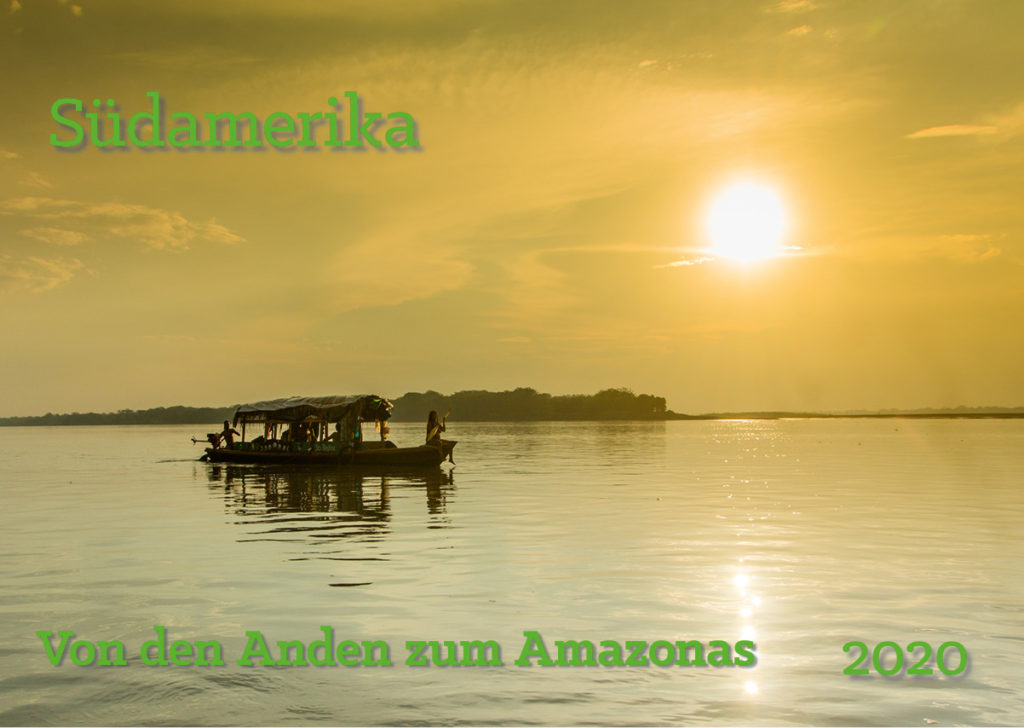 1
1
1
This website uses cookies to ensure that you get the best experience. If you continue to use this site we will assume that you are happy with it. Diese Webseite verwendet cookies um ein angenehmes surfen zu ermöglichen. Wenn du diese Seite weiterhin besuchst gehen wir davon aus das du damit einverstanden bist. Ok